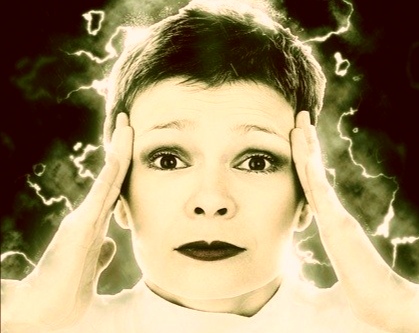 My health was better, but not perfect and an occasional migraine would rear at the most inopportune moments. One happened while in class. Two of our instructors were taking Acupuncture courses, and they looked to us students as their captive guinea pigs, upon whom to try out their new skills. We had our tongues assessed and all sorts. The day of my migraine, I must have looked awful, because the instructor stopped the practical session and asked me what was wrong. His face lit up with an opportunity for an acupuncture treatment (and a demonstration to the class) with a somewhat risky procedure (if he got it wrong). I consented because I was in pure misery, and I trusted his integrity.

He inserted an acupuncture needle at the back of my head, between my cranium and C1 vertebrae. Then he told me to sit and not move at all (as that was risky). I soon became what I can only describe as like a heavily drugged person. I was in total La, La land. I couldn’t concentrate on the practical lesson either. When the instructor asked me something 10 minutes later, I said “what?” not even understanding the question let alone be able to give the answer. “How do you feel?” he said a little later , looking concerned. “Mmmmm, lovely,” I said dreamily. He decided that the 20 minutes that had passed was enough, and came over to retrieve the needle. It wasn’t where it was supposed to be and had disappeared. The colour drained from his face.

The whole class was put on hold as he told me to stand up slowly. It wasn’t on the chair or the floor. He drew a curtain around me and asked me to take off my clothes, carefully, one at a time until I found it. I had got to my underwear before I saw it drop on the floor. “Got it.” I said in a slurred voice. He looked so relieved. He was worried that the very thin needle had somehow worked its way into my skin, and had disappeared into my spine  with death as a possible outcome! I was happy, oblivious and pain free.

The same instructor brought in a Qigong instructor one day to teach us good posture, balance and harmonious movement that protected us from giving ourselves injuries, especially the repetitive strain kind. This small man was also a Master Reiki practioner. He spent some time with each student, watching them during a massage and indicating techniques needed to correct bad posture. When he came to me and said, “You have lovely white light surrounding you completely, I could see it from across the room.” He watched me for a while and didn’t say much else but pointed out ways to use my legs for strength. He then invited me to join his next Qigong class.

Actually, I was wanting to complete a number of extra courses, so working was really becoming hard for me and stopping my progress. Serendipity kicked in. My boss was doing performance appraisals that week. Mine was absolutely appalling. I had never had a review like it. I knew none of it was true, but difficult to prove. Along with it, was a warning letter! This is usually the first step made in the procedure to fire someone, so the alarm bells were ringing loud and clear. I decided to resign (she knew that I would), even though it would mean more financial hardship. I would benefit from extra study time, and would leave the dregs of this part of my life behind. It was a bitter-sweet moment.

Unfortunately, my partner didn’t see it as sweet at all. He totally lost his temper. You’ve chucked a perfectly good job straight down the toilet, he admonished. I had, but life moves on and sometimes you are not meant to go down the destructive path any longer.

My boss kept delaying my leaving party (twice the dates were changed). I knew she didn’t want to hold one, and in truth, I didn’t really care, but it was a matter of principle for me… I was entitled to one and even after my last official work day, I kept pushing for it. She had no choice but to organise it. All long term employees have a leaving party.

I learned from some of the staff (confidentially) that it would not be a happy shin-dig. They had been banned from collecting for a gift for me (a usual and voluntary protocol) and there would be no potluck lunch (another usual voluntary sort of attendance, and a chance for staff to socialise). Instead, a late afternoon (almost at quitting time) tea and cake ceremony had been arranged. The staff were ‘ordered’ to attend.

I arrived and the room had been set with chairs lined up against the walls of a small room. The staff sat gloomily in a quadrangle, looking like prisoners facing a firing squad instead of people wishing me well. I meditated a few seconds of Grounding for myself as I sat down. My boss  made a totally phoney speech, and her subordinate, simpering, production manager then recited a terrible, composed poem that was ridiculous (and not bringing the intended guffaws from solemn-faced staff). I started to giggle and then to  maniacally laugh at her fake friendliness. Our photographer was snapping photos of my contorted face (they would never be printed). My Boss snapped, “Why are you laughing,” totally losing her cool and showing her true colours in front of the staff. I had made up an excuse about the photos making me feel self-conscious, but she knew why I was laughing.

My boss told the photographer ‘to knock it off, no more photos,” cut the poem short that her sidekick was reading aloud, and quickly presented me with a cheap reproduction university watch and lapel pin. I looked at them with bemusement. My boss had never got to know me properly. Everyone who knew me well, knew that I can’t wear watches because they always stop working or behave so erratically, they are useless to me. Neither item would ever be worn, and I eventually chucked them away as they just felt like bad energy.

Ceremony finished, the cake and tea were handed out. The green and white icing was ludicrously garish. As people sat with their refreshments, the University Provost came to sit next to me. He was basically fishing for information. He protected my boss (his protégé) until his retirement some years on from this (when ultimately she, herself would be fired). I think the Provost wanted to see if I was going to proceed with legal action. I had sent in a letter to say that I felt my resignation was forced under unnecessary duress. That was all I was going to do, just for the record, but I had received a letter back from my boss that the matter was now in the hands of University lawyers.

I made idle chat with the Provost, and then said, “did you know that your teeth have turned fluorescent green?” I grinned at him. I looked around, everyone was now speaking with the dental sets of Norwegian Trolls. It was hilarious. The Provost closed his mouth and left to find out which ‘clown’ had produced such a terrible dye in the cake.

Unfortunately the cake had the same effect as an Ebola outbreak. The staff quickly dumped it into a bin and started to line up to quickly to wish me well and exit the building as fast as humanly possible. I felt like I was accepting commiserations at a funeral line… Ah, but that cake was such fun! Someone was definitely on my side. 😂 I was free and I didn’t care that the party had been a total disaster.

One thought on “Earthing ~ End of a Cycle”