I have barely scratched the surface with Graphology (forgive the pun). It is a deep and complicated journey through a piece of writing full of nuanced thoughts, styles and interpretations. Most true Graphologists train for years to gain a proficiency that is consistent . I am just looking at this in a self interested fashion and wanted to share a little bit that I have learned.

A look at samples of  writing again

These are my interpretations only and do not reflect the work of people more qualified than I, but I have used some guidance from various Graphology Web sites (all listed below).

We have already noted Donald and Melania Trump writing styles as being similar. Both are somewhat forceful, aggressive people, and not very empathetic. They show ‘loner’ tendencies. I think they are quite compatible. They leave each other to their own space and are happy to do that because they both prefer it.

This couple is Brad Pitt and Angelina Jolie. They already had (before marriage) a common interest in helping disadvantaged kids, but they themselves, are from very different backgrounds.

Nicknamed ‘Brangolina’ during their marriage because they seemed to be the perfect couple. Their signatures say otherwise.

It is difficult to find normal handwriting for each. Apparently, both Pitt and Jolie  have a tendency to write publically in printed capital letters (a sign of privacy, and wanting to be clear and not misinterpreted, repressing their own feelings). Now divorced,  Pitt shrank from the public spotlight for a while, upon the breakup, with media reporting on his low mental state, and his retreat to be with consoling friends. Jolie did not. She held her head high and carried on with life as normally as possible.

Brad Pit has a simple upright, initials only, signature, which he might have developed during their Marriage. He shows a sense of pride in who he is and he promotes himself with an upward curve in the underline. Both letters carry a sense of self confidence, a tendency to think carefully, and creativity, but the letters are squished together (insular).

Pitt is materialistic, but there is also a sense of trying to shut out his materialistic nature with the curved underline crossing out the long down stroke on the ‘p.’

Pitt has signed to the left of Jolie (who wrote the note and signed before he did), an attempt to make himself look more important than his wife.

I found a signature that had Brad Pitt’s whole name. The signature is more revealing because of the sudden drop off of the last letters (a sign of depression or unhappiness). The underline, forms a low cross representing the ‘tt’ on the dropped off last name. It suggests that Brad has low self esteem and is disappointed with himself for not living up to his family name.

Angelina Jolie is a stronger personality than Pitt, showing aggressive jagged strokes in her public signature. The ‘A’ is wide spaced (inflated ego) and the rest of the letters appear as a series of triangles also quite widely spaced (stubbornness), she thinks logically and carefully about everything and is pragmatic about all things. She is open only with people she knows, but is a person who can show extraordinary friendliness to people who make it into her circle. Her handwriting shows a soft garland quality on the baseline, but there is not a great deal of empathy (closed ‘e’).  She is confident and reserved with an opinionated ego, has respect for herself and pride in her profession. She also has loner tendencies and is fiercely independent in her work. Her stroke linked words suggest eagerness or impatience. Her nest handwriting and carefully placed ‘i’ dots suggests a precision and perfection-oriented attitude.

It is no wonder that the ‘Brangolina’ team fell apart. Angelina Jolie simply charged ahead and left Brad Pitt in her dust!

They were never compatible in style, but Brad was unable to keep up for a complimentary relationship either. The match was doomed from the start.

These two samples belong to Boris Johnson and Jeremy Hunt, both contenders for British Prime Minister to replace Theresa May. Both have an agenda to take Britain through Brexit. 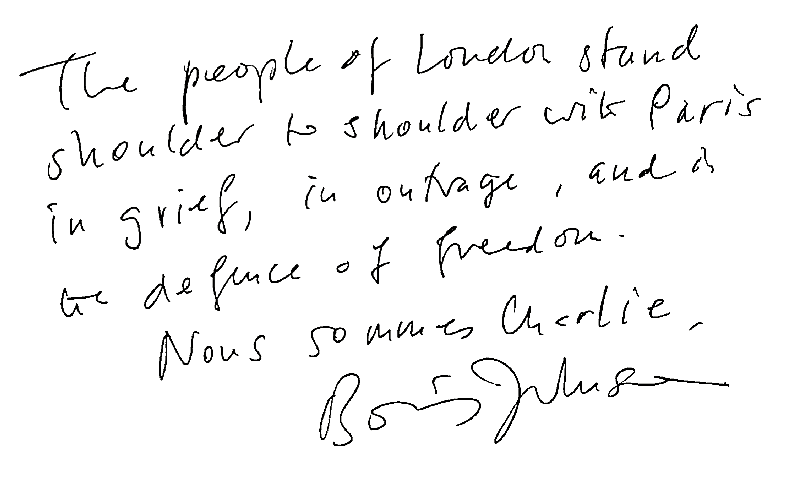 Johnson’s writing slants upwards, showing an upbeat positive attitude. His writing a mix of cursive and print is clear and precise, signifying intention, but the dots on the ‘i’ s show an impatience and the right slant on the words show a slight impulsiveness. He has a normal ‘t’ so is not driven to high personal achievement, but is confident and pragmatic. He doesn’t have a personal inflated ego, but does put emphasis on family and social groups (political party) with a lower emphasis on his position within them (modesty). Johnson doesn’t always close his a’s and o’s properly (can’t always keep secrets). He has some e’s that show some empathy for others. But a lot of them are closed suggesting, not always. The signature is confident and puts equal weight on both his Christian and surname. Boris knows who he is and has no need to inflate himself.

Hunt has very small blotchy writing with letters that don’t always close suggesting that he will use whatever confidential information he is given to further his agenda. His writing is not easy to read so perhaps has a private quality, but it does have some precision to it (self control). The words show a tendency to slant differently (left and right) showing an inability to control his emotions at times. The i’s are dotted perfectly, showing precise calculation. The t’s are crossed with confidence with a positive upswing to the cross stroke, and the m’s show balance (no inflated ego) with balance in self, family life and job. Hunt believes in himself. The writing has a tendency to slightly curve downwards and then back upwards again, suggesting an effort to stay positive when feeling negative about a situation (determined to show he is in control). The small letters show a tendency to hold in emotions and not reveal any insecurity. There is a sense of frustration in the y’s. The writing suggests inner struggle but determination to succeed. Hunt’s e’s (sign of empathy) are mostly closed, but that might be due to the smallness of his writing. Hunt’s signature is confident, clear and emphasised (underlined) on his first name (I am Jeremy), but almost dismissive of the surname. Jeremy is an individual out to prove himself.

Not everyone will be convinced about the accuracy of Graphology, but there have been a number of historical studies done by European psychotherapists to confirm what has been noted in aesthetic philosophies for centuries. Our brain will make subtle changes to the pattern of our words commensurate with our state of emotion, health and perceived social status. Our style will change as we age, and with failures and successes in life . There is a further theory that if we change our conscious effort towards more positive writing styles, we change our perception of the world too. Many therapists working with children in schools will apply some of these principles to help children deal with disabilities to express themselves in more positive ways.

Certainly, employers who use Graphology methods, can determine if a candidate will be a suitable fit in the social hierarchy of a company. Graphology cannot determine if a candidate will be the perfect candidate, or if they will be able to carry out all aspects of the job. It cannot accurately determine how the applicant will apply their traits, if at all. A person with a felon’s claw trait does not necessarily mean that he or she will commit a crime, or act violently. It does indicate that the mindset is there.

I will finish up here… but if you want to know more, do look at the links below.

The next post will be a reprinted (with permission) guest post on ‘Worrying’ from gserpent. It fits well with these posts on handwriting. One of the reasons that our handwriting holds so many traits, is because we have various unconscious insecurities about how others may perceive us. We worry what other people think about us or worry about whether we can trust others. If we can stop the ‘worry’ and change our writing to reflect positive behaviours, imagine how it can change our outlook on life. We can be the best we can possibly be, and maybe find the answer to how we move forward in a more positive relationship with the world and to each other.

If you want to know more about Graphology, its history or study tips, these Websites are good starting points.